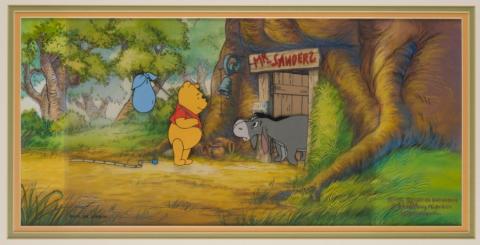 A production cel and background setup from the Walt Disney Studios animated series The New Adventures of Winnie the Pooh. Featuring the adorable Winnie the Pooh, being beckoned into the iconic Mr. Sanders doorway by his morose friend Eeyore, the hand-painted cel and beautifully painted background were created at the studio to be used during the animation process. The piece is an actual frame of animation that was photographed and appears in the episode Good-Bye, Mr. Pooh (1989). Measuring 16.75"x26.25" framed with the mat opening measuring 8.5"x17.75", and the character image measuring 4.5"x7", the artwork is in fine condition, unexamined out of frame, and includes a studio certificate of authenticity.