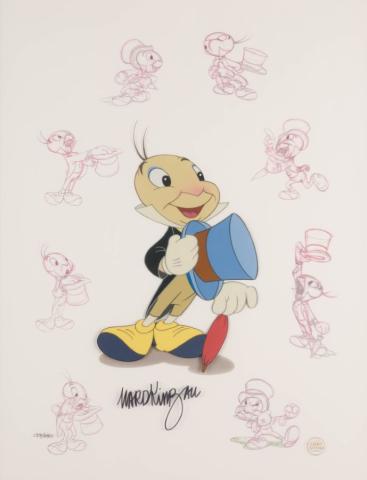 A signed limited edition cle of Jiminy Cricket from the Master Series. Featuring the lovable conscience Jiminy Cricket in color, and his various moods as rough concept model sketches, the limited edition was recreated in 1995 using original reference material and artwork from the Disney Studios production of Pinocchio. The cel is hand-signed by Disney Legend Ward Kimball, who was also the directing animator of the original film, and only 350 pieces were created in the edition. Measuring 25.25"x21.25" framed with the mat opening measuring 17.75"x13.75", and the main, painted character image measuring 8"x6", the limited edition is in fine condition, unexamined out of frame, and includes the original certificate of authenticity.